Hearing the parable of the Good Samaritan—for the first time!

Dedicated to Rev. Rusty Smith, the E.D of Maitri Compassionate Care . Rusty was trained as a priest in the Jesuits. Please visit their website, and consider helping in anyway you can.

My friend, Joe Devlin, a Jesuit priest, said Mass in the zendo at Hartford Street early in 1990. Joe was visiting friends in San Francisco, and I asked him to come by to say Mass for the Catholic men in Maitri Hospice. I told Issan about my plan, and he said he was happy to have Mass and very excited to meet Joe.

It was a Saturday evening, and Joe was due to arrive at 5. I was scrambling, assembling a few basics, actually just the essentials, bread, wine and a clean tablecloth for the dining room table. Issan, who was at the time in the final stages of HIV disease came downstairs in his bathrobe, to ask when “Father Joe” was due to arrive, and see what I was doing. After I explained, he said with a big smile, but firmly, “Mass will be in the zendo, not the dining room.” Then he took over and directed all the preparations with the same care that he would have given to a full-blown Zen ritual, the table he wanted for the service, the table cloth, the candles, the cup. He went back upstairs and when he came down again, he was dressed in his robes. He greeted Joe at the door with a hug and kiss, thanking him for coming and telling him that Mass would be in our chapel, the zendo.

Issan and five or six of us sat in meditation posture on cushions while Joe improvised the ancient Catholic liturgy, beginning with a simple rite of confession and forgiveness. I noticed that Issan brought the same attention to the Catholic ritual as he did zazen and Zen services. When it came time to read from the New Testament, Joe took a small white, well-worn book out of a pocket in his jacket, and said that his mother had told him that the story he was about to read contains all the essentials for a true Christian life. 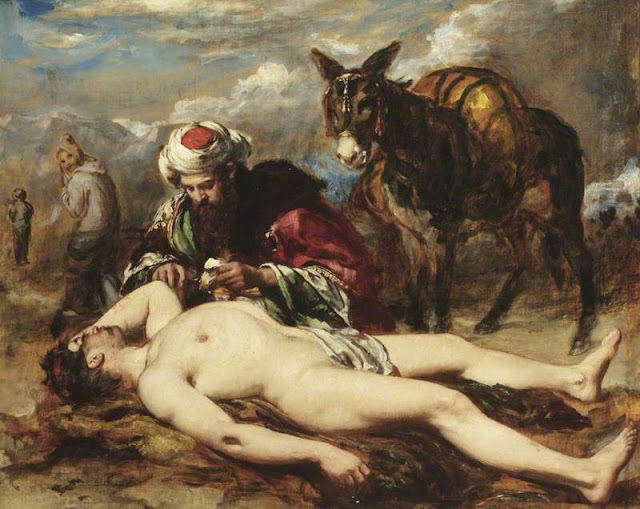 Then he read from the gospel of Luke, chapter 11, the parable of the Good Samaritan. For any of you who need a refresher course in New Testament studies, this is a story about a man who is robbed, taken for everything he has, savagely beaten and left by the side of the road to die. All the people who might have helped, even those who should have helped, chose to walk on the other side of the street when they saw him—except for the Samaritan. Now the Samaritan in Jesus’s day was the guy whom good upstanding members of the community might have called the equivalent of “faggot” or “queer.” He was an outcast, but he was the only person who actually stopped and took some real action to help the poor fellow out. Jesus teaches us that real love is shown through actions, not words.

The next morning—Sunday mornings were the usual gathering of the Hartford Street community—Issan began to talk about Fr. Joe and the liturgy. He was exuberant. He had fallen in love with Luke's parable, and Joe. He turned to me and asked, “What was the little white book that Fr. Joe read from?” Startled, I said that was the New Testament. “Oh,” said Issan lightly, “it must have been in Latin when I heard it as an altar boy, but it was exactly how we should lead our lives as Buddhists.” He then said that during the Mass he had the experience of really being forgiven and that the experience had allowed him to feel peace, even appreciation for his early religious training.

Issan saw Maitri as much more than just a Buddhist hospice, though it was deeply Buddhist to its very roots. He shaved his head, and wore a Soto priest’s patch-work robe, he bowed and chanted in Sino-Japanese, but he understood very clearly that real wisdom, what we call prajna, is not the sole property of any religion.

When Joe and I had dinner together the night before he flew back to Boston, I told him what Issan had said. A few days later, the small New Testament that had been in his jacket for years arrived in an envelope addressed to Issan. Before Issan died 6 months later, during one of our last meetings, he asked me to thank Joe again for the zendo mass after he was gone. I did. And that New Testament which passed from the pocket of Joe’s jacket to Issan’s spare bookshelf at Hartford Street to my altar. I have since passed on to another person who asked a dharma question about one of the stories in the gospel of Jesus.