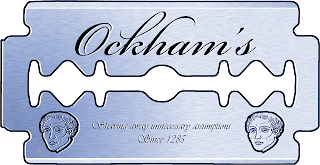 Asking another question of Occam’s Razor

In the process of doing his own spiritual work, my friend Daniel Shurman carefully teased out another layer in my understanding of Saint Ignatius’s Discernment of the Spirits by insisting on a dimension that is perhaps overlooked--seeking the Truth.

When we studied scholastic philosophy, our Jesuit masters teased our intellects with an absurd question posed by Thomas Aquinas, “How many angels can dance on the head of a pin?” It’s a question ad absurdum because it was designed to demonstrate that the time and space between heaven and earth cannot be measured no matter how hard you try.

Daniel tossed out the rigid philosophical reduction, and in its place created a generous space for the spiritual dimension of joyfully watching The Dance of Angels.

Here’s how he did it. Daniel loves an elegant solution, and this pointed me back to William of Ockham’s Law of Parsimony.1 Occam’s Latin is of course succinct and worthy of a renowned philosopher: Numquam ponenda est pluralitas sine necessitate, which translates as "Plurality ought never be posited without necessity.” Precise but also misleading—the word “parsimony” throws truth into a dustbin for the stingy. I prefer a more generous interpretation. Let’s try this: “The simplest, most beautiful solution is probably true.” A logical problem arises because non sunt multiplicanda entia sine necessitate cannot be a tight fisted rule. Sometimes there is more than one reason or argument. Still a more elegant line of argument points to the truth. It also gives angels the freedom to dance.

Ockham actually gives us a tool rather than an ironclad rule; its metal is called “Occam’s Razor.” It shapes a proposition: whittle away the random thoughts; pare down your idea, the plan, the problem by shaving off unnecessary words, feelings, resentments, withholds, and you get closer to the truth of the matter. Wittgenstein said: "If a sign is not necessary then it is meaningless. That is the meaning of Occam's Razor" (Tractatus Logico-Philosophicus: 3.328).

While stuffy old Aquinas was puzzling over his absurd question about the quantity of angels,  Daniel invited Steve Jobs, along with Ockham, to observe the angels dance. Daniel and Steve zoomed out to watch a multitude of angels dance on the razor’s edge, and make connections. Then Daniel with his relentless and unflinching honesty zoomed in to observe the single angel pointing to a solution or, at least, marvel at the graceful lead dancer in the choreography. (And I’ve watched him dance with one very beautiful angel. He is masterful).

I was alerted to the emotional ambiguity of the discernment process by the renowned Jesuit Cardinal, Avery Dulles. In one of our last meetings, he held up the small volume of the Spiritual Exercises, and said, this is a book to be used, not just read. Then he said that there was a tendency to assign the simplest of feelings to the weighing of what Ignatius called “consolation and desolation” which tended to reduce it to a kind of “feel good” spirituality. He confessed that he was more inclined to be directed by reason than feelings, but still he thought that Ignatius’s recommendation of inclining towards the solution of what feels best pointed to perhaps something far deeper than one that just feels good in the moment.

Like Jobs who would “zoom out to connect the dots, then zoom in and simplify,”2 and Ockham who used a process of simplification as a rigorous arbiter between candidate models, Daniel examined the panorama of his own feelings to see a clear line that led to an elegant solution.

Daniel reminded me in the most beautiful way that if we bring all of ourselves into the process of discernment, with patience, compassion and rigor, we true up our course of action.

"Beauty is truth, truth beauty,—that is all

Ye know on earth, and all ye need to know."3

1The Law of Parsimony is attributed to William of Ockham. And perhaps here he’s Plato to the genius of many schoolmen which is why I dragged Aquinas into the battle.

2“Steve would zoom out to connect the dots, then zoom in and simplify.” [John Sculley’s quote].

3 From “Ode on a Grecian Urn” By JOHN KEATS.

I’ve used William of Occam’s principle to discuss the use of condoms to combat HIV/AIDS in Africa in my blog Buddha S.J.