The Record* of Issan

The teaching of Issan Dorsey Roshi, (March 7, 1933 — September 6, 1990)
*A Record is just what it says it is, the recorded sayings of a Zen Master, his or her enlightenment experiences, teaching koans, anecdotes, dharma lineage, and other interesting stuff—basically the monks’ crib notes for their study after an encounter or teaching in the assembly hall. And that’s what I use it for too—my practice.
The Chinese masters and their disciples began using this traditional title during what is considered Zen's Golden Age, cc 700-900 C.E.. My notes about Issan, his teaching, and the teachings of his dharma friends, come from a more recent period—between 1988 when I moved into Hartford Street Zen Center and Issan’s death in 1990.
I have included some teaching stories by Zenshin Philip Whalen who was part of Hartford Street Zen Center and part of the Maitri sangha, although a somewhat reluctant one, as well as some tales about the Hospice.

I have also tried to include photographs, notes, memories, sayings, jokes, happy memories and sad ones from other periods of his life.

Some material I do not fully understand which I will try to present as honestly I can hoping that Manjushri might enlighten me down the road.

And because I am the recorder, and not objective, I have included some things about me. 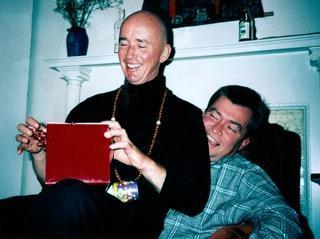 “The world is ending. Where is the great peace when we need it?”

Issan loved Bobby McFerrin’s “Don’t worry. Be happy,” but he added a line

A reflection on the death of Alan Watts and Issan’s answer to a student’s question about suicide,

Issan’s meditation instructions when he was dying.

Reflections on the koan "Little Jade." This story about Issan’s last week of life came back to me when another Buddhist friend received news of a grave diagnosis from his doctor.

Issan hears the parable of the Good Samaritan—for the first time!

My friend Joe Devlin, S.J. celebrated a Catholic mass in the zendo at the Hartford Street Zen Center for Issan and other men at Maitri Hospice. I dedicate this piece to Rev. Rusty Smith, the Director of Maitri Compassionate Care. Rusty was trained as a priest in the Jesuits. Please consider helping in any way you can. Dana is always welcome; you can also consider volunteering.

Bruce Boone’s memory of Issan at the shrine of Saint Francis.

Mindfulness Is Not a Part-Time Job, Originally posted on January 13, 2012

This may be the only surviving transcript of any of Issan’s dharma talks. It appeared in the newsletter of the Gay Buddhist Fellowship in January of 1995, four years and five months after his death from AIDS. Though I can see an editor's hand, Issan comes through in his simple eloquence and the depth of understanding.

The Founding of Maitri Home and Hospice for People with AIDS,

This is the draft of a chapter from a forthcoming book: A Thousand Arms: A Guidebook for Buddhist Leaders, edited by Danny Fisher and Nathan Michon.

Issan Dorsey and Some Undisclosed Secrets of the AIDS Epidemic, January 27, 2012

An interview with Marlin Marynick for his book.

A short piece I wrote for a German Buddhist magazine, Ursache & Wirkung, in an edition about "Buddhismus unter dem Regenbogen.”

The Hands and Eyes of Great Compassion, Wednesday, August 18, 2021

The Funeral of Osel Tendzin. Deliver us from cults, Thursday, May 13, 2021

“Next Question” please (in revision)The re-examination of an oppressive conversation about the prohibitory precepts and personal reflections about gay men's practice.

This was written for the publication of "Spiritual Journeys" by a group of former Jesuits.