I hate getting such poor representation. Not in the quality of the people that California sends to DC but in the diluted impact that my participation has in our highly fractured democracy. By my calculation one third of me is represented by a US Senator, Is it my head, my belly or my kneecaps?

Not even considering the very small states that have two senators (let’s leave that out of the calculation--we can haggle later) using gross averages 48 senators represent about 6 million people each. In California, each senator represents almost 20 million.

There are 435 voting members of the House of Representatives. California has 53 members, almost 12%. There are 42 Democrats and 11 Republicans.

Given the highly partisan politics in the country and the obscene amount of gerrymandering, let’s get four more senators. Make California into 3 states. Two would be easy and has been often talked about. Given the huge urban vs rural/agricultural population split, there is a high chance of at least a few of the new senators from the Three-State-Split-Up California being Republicans.

In 1787 three-fifths of each state's slave population was counted toward that state's total population for the purpose of apportioning the House of Representatives. Today every Californian is counted as about 33% worthy of senatorial representation.
It's time to revisit the 2018 Cal 3 Proposal. Get us more senators. 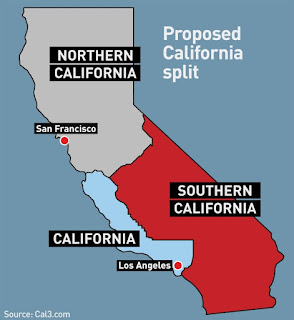